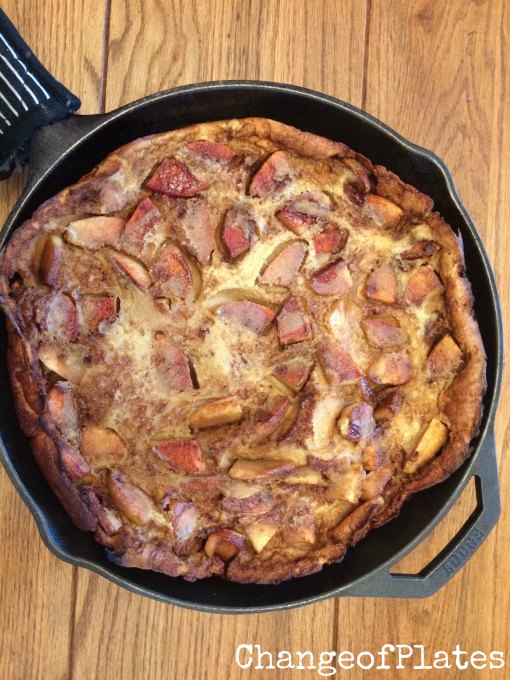 In all honesty, I really don’t mind. My boys much prefer the cold and snow to the hot and muggy. So, at least this lessens the amount of time that they will be in the house complaining that it’s too hot.

Perhaps. A girl can hope.

I decided to liven up our usually boring breakfast routine – eggs, meat, fruit, muffins. repeat. – with a new twist on an old friend.

A couple of years ago, I discovered the beauty of the Dutch Baby – an oven pancake made with eggs, milk, and flour. The boys would scarf down the whole thing, leaving very little for their two parents-with-a-big-appetite.

I made it plain; Big Britches and The Bread Guy would eat it with maple syrup while Mr. Selective would slather his with chocolate chips.

And then, one day, they suddenly didn’t.

I think I had overused it and so they got tired of it.

Fast forward to this morning … I was in the mood to make something different, so I decided to revisit this old friend … and add some caramelized apples. A friend had told me that she makes hers with apples, so I figured I’d give it a whirl … knowing full well that The Bread Guy would be greatly displeased and that there was a chance that the other two wouldn’t eat it.

Sometimes you just have to throw caution to the wind.

Print
Prep time
20 mins
Cook time
30 mins
Total time
50 mins
Author: Tracy Becker
Serves: 8 Servings
Ingredients
Instructions
Notes
If you don't have an iron skillet, you should get one. However, I have read that you can also use a glass casserole dish. If you do, I'd recommend that you warm it with the butter, rather than warming the oven with the dish inside. I have never made a Dutch Baby with a glass dish, so if you go this route, I have no idea how it will turn out. Just sayin'.
3.2.2925
You can make a plain Dutch Baby by simply eliminating the apple part of the recipe and just adding the batter to the hot butter.

I have to give props to The Bread Guy because he did give this a fair shake, but the “apple flavor” overtook the “pancake flavor” and made it not edible. Add a squished-up nose and a lemon-face and you get the picture. Everyone else ate it. Happily.

They usually avoid the edges of a plain Dutch Baby, but that was the best part of this one. Crispy, sugary, buttery deliciousness.

How to top this on the mostly-expected snow day number E.I.G.H.T tomorrow?